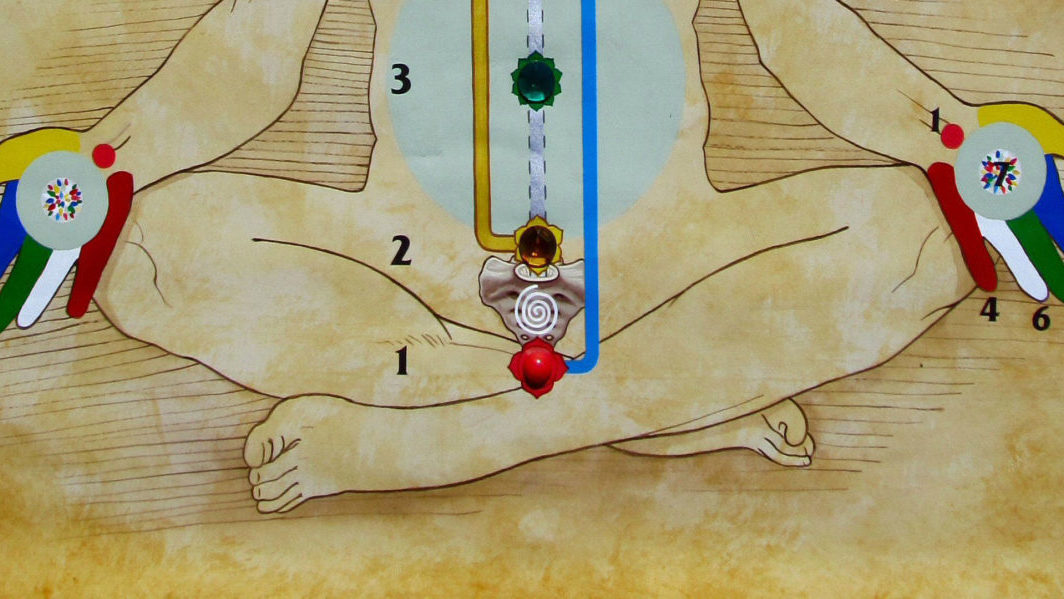 Other parts of the article:

Knowledge of the Kundalini Part 1

Knowledge of the Kundalini Part 2

Knowledge of the Kundalini Part 3

Knowledge of the Kundalini Part 4

The word Kundalini is derived from a Sanskrit word ‘Kundal’ meaning coiled up. It is the primordial dormant energy present in three-and-a-half, coils at the base of the spine in a triangular bone called the Sacrum. The Latin name ‘Os Sacrum’ suggests that it is a holy or sacred part of the body. The ancient Greeks were aware of this and therefore they called it the ‘Hieron Osteon’, noting that it was the last bone to be destroyed when the body is burnt, and also attributed supernatural powers to it. Egyptians also held this bone to be very valuable and considered it the seat of special power.

In the West, Sacrum is symbolised by the sign of Aquarius and by the Holy Grail, container of the water of life.

The Kundalini, which is to nourish the tree of life within us, is coiled up like a serpent and therefore it has been called, ‘The Serpent Power’. It has been described in great detail in the Upanishads. Kundalini Yoga is supposed to be supreme in all the Yogas. Guru Vashistha asserted that Kundalini is the seat of absolute knowledge. The awareness of the presence of this primordial energy Kundalini within the human body was considered by the sages and saints to be the highest knowledge. The Kundalini and Chakras have been vividly described in Vedic and Tantric texts.

He lived in the 7th-8th century AD. and wrote:

‘Having filled the pathway of the Nadis with the streaming shower of nectar flowing from the Lotus feet, having resumed thine own position from out of the resplendent Lunar regions and Thyself assuming the form of a serpent of three and a half coils, sleepest thou, in the hollow of Kula Kunda (Kula Kunda means the hollow of Mooladhara Sacrum bone)’.

‘Saundarya Lahari’: ‘Thou art residing in secrecy with Thy Lord (The spirit) in the thousand petalled Lotus, having pierced through the Earth situated in ‘Mooladhara’, the Water in Manipura, the Fire abiding in the Svadhisthana, the Air in the Heart (‘Anahata’), the Ether above (Visshuddhi) and ‘Manas’ between the eyebrows (‘Agnya’) and thus broken through the entire ‘Kula Path’.’

Gyaneshwara, another famous saint of Maharashtra born around 1275 AD, described Kundalini in the 6th chapter of his famous book ‘Gyaneshwari’. He wrote:

(born in 1496 AD) has made references to Kundalini awakening as mentioned below:

“A pure heart is the golden vessel to fill the Divine Nectar which is to be sucked from the ‘Dasham Dwar’ through the two channels ‘Ida’ and ‘Pingala’.” Dasham Dwar means Brahmarandhra. (Sahasrara Chakra).

‘God has made this human body a house with six Chakras and has established the light of spirit in it. Cross the ocean of Maya and meet the eternal God who does not come, who does not go, who neither takes birth nor dies. When your six Chakras meet in line, Surati (Kundalini) takes you beyond distortions.’ (Sri Guru Granth). Note that the seventh Chakra was not open at this time.

Prophet Mohammed Sahib talked of the day of resurrection when he says that the ‘hands will speak’. ‘That day, we set a seal on their mouths, but their hands will speak to us, and their hands bear witness to all that they did.’ When Kundalini awakening occurs, a flow of energy in the form of cool vibrations from the hands is experienced, and the various chakras can be felt on parts of the hand and fingers.

Christians called it a reflection of the Holy Ghost, and worshipped its manifestations as tongues of flames over the heads of apostles during the Pentecost reunion.

Moses saw it in the form of the burning bush. During the exodus the israelites lost faith and were smitten by fiery serpents so God told Moses “make thee a serpent, and set it upon a pole: and it shall come to pass, that everyone that is bitten, when he looketh upon it, shall live. And Moses made a serpent of brass, and put it on a pole, and it came to pass, that if a fiery serpent had bitten any man, when he beheld the serpent of brass, he lived” An apt description of the healing quailities of the awakened Kundalini. Some of the Israelites even began to worship this symbol, and the practice of worshipping the brazen serpent on the pole as a god was either passed on, or was revived later. Bronze and stone serpent artifacts have been found in excavations in Canaan, Gezer and other parts of Israel!

The Old Testament symbol becomes significant in christianity when Christ suggests Kundalini awakening, not just for the tribe of Israel but as the true destiny of all Christians: “And as Moses lifted up the serpent in the wilderness, even as the son of man be lifted up: That whosoever believeth in him should not perish but have eternal life” He says unequivocally in the Gnostic Gospel of Thomas and elsewhere, that ‘The Holy Spirit is My Mother’. ‘The Kingdom of God is within you’ (Luke 17:21).

In the Tao Te Ching the primordial power is described as that of a mother. Lao Tze described Kundalini as the “spirit of the valley” (in which flows the Nadi of Sushumna). The spirit of the valley never dies. The spiritual instrument within us can be described as a microcosm (miniature form of creation) which links us with the Divine. The ancient esoteric text “Scripture of the Golden Flower” also spoke of the effects of the awakened kundalini enerhy.

The Lord Buddha spoke of the “middle path” to achieve nirvana. He was actually describing the central channel (sushumna) through which the Kundalinii ascends. Later Buddhist masters considered that the existence of the path of liberation within a human being was the greatest secret. They transmitted it to only a few deserving disciples.

One also finds symbols of Kundalini in many different cultural legacies, such as Mercury’s serpent which is an alchemical symbol for the process of psychic metamorphosis. The Gnostics understood the serpent to represent the spinal cord. In ancient Greek and later, Roman mythology, we find Asclepius, the god of healing. He is seen holding a staff which is entwined with a serpent (or sometimes two). Why did the Greeks relate this symbol to healing? The staff represents the central support of the human body or spinal cord (physical location of the sushumna. In Rome Aescaluius came tobe represented mercury who usually held a healing staff called the Caduceus.The one or two coiled snakes or serpents entwined around the staff, represent the kundalini which rises along the central subtle channel in a spiral double helical movement.

The Kundalini is there to nourish, to heal and look after and to give an individual a higher and deeper personality. The power of Kundalini is absolute purity, auspiciousness, chastity, self respect, pure love, detachment, concern for others and enlightened attention, to give infinite joy and peace to an individual.

This article is taken from the Knowledge of Reality magazine.