The bullock cart – A story about equality 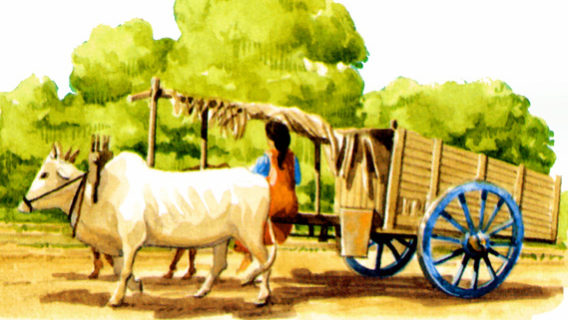 On a farm in the heart of India, there lived a farmer and his wife. They were rather poor, but earned their living by collecting milk from all the farms in the area to sell it on the market in the city.

One day, like all the other days, the farmer set off to work. He fed the oxen and attached them to the cart. Everything seemed to work smoothly, until the front wheel started to speak.

“I am so great. Look how well I am made. The best iron bars have been used to shape my wonderful, round frame. The wood is still in brilliant condition after so many rides and see, what a beautiful pattern I make in the earth! Without me, this whole cart would not move an inch!”

“You are terribly vain, dear wheel” called one of the wooden planks. “Without us, there would be no cart! We planks are holding the whole cart together, keep the milk from falling and offer our farmer a place to sit.”

“Well, maybe.” Said the wheel. “But after all, I and my three wheel brothers are the most important part of this cart!”

“Are you so sure?” spoke a little voice. “Who is talking?” the wheel replied, pretending not to have heard it. “It is me. The screw!”

“The screw?” the wheel asked and burst out into laughter. “You out of all parts? You are so tiny, we can barely see you! You are really not important at all! You are not even moving. You just sit there with your bolt friends and do nothing. Nothing.

We wheels work hard, turning day in day out, carrying you lot through fields and forests. But a tiny little screw like you? You should not even talk!” Those were very harsh words coming from the wheel. Luckily, they did not make the screw angry, but gave her an idea. She would teach the proud wheel a good lesson.

At the next curve, when all those heavy milks cans lent against the wooden planks yet again, she pulled together all her strength and turned and turned around her own axis. After some time she had finally twisted around so much, that she fell into the grass without any sound at all. That very moment two planks that had been attached to each other through this tiny screw became lose and gave in to the heavy load of milk cans. One milk can after the other rolled against the loose planks and hit the ground with a terrible noise. The planks loosened more and more until more wooden planks started to crack and the entire cart collapsed in itself. The farmer turned around in shock, but too late! He was thrown out his cart landing in a poppy field nearby!

“Goodness! What happened” he shouted. Planks, wheels, milk cans lay scattered all over the path! “He took off his head wrap and scratched his head! “How will I get this mess together again?”

It did not take long to align the wheels and put the frame into place. But there seemed to be something missing, to keep the lot together! “Where are those tiny screws and bolts!” the farmer shouted out and started looking for the little silver parts. He searched for many hours, combing through every tiny bit of grass until he finally had all the screws together. “Thank God” he said, picking up the last screw from the ground. “Without you I would never be able to put my cart together again!”

When the sun started to set, the cart was finally rebuilt and the farmer set off to return home. After all, most of the milk cans were empty and he had nothing more to sell.

“I was foolish” said the wheel. “I was boasting and showed off how great I am, when really, all of you are needed as much as I am. Only as a whole, all of us together, we make this cart work. And now, because of me, our poor farmer has lost his weekly earnings. I am sorry to have made you all feel bad. I can see now, that how ever small you may be, you are needed as much as the rest of us”.

The screws and planks, the bolts and even the milk cans felt really happy that the vain wheel had come to its senses, and from this day on, the dear farmer never had any troubles with his cart anymore. Ever. 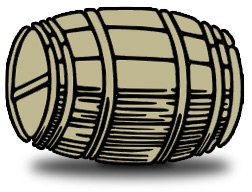 Writing stories for children had never been a real plan of Austrian born Sia Reddy, but happened rather spontaneously out of a desire to create stories with actual values. As a mother of three and practicing Sahaja Yoga since 1992, Sia has been involved in the buildup of the Meditation and Play project since 2007. She is currently writing short stories for children and adults and hopes to bring out a collection book.