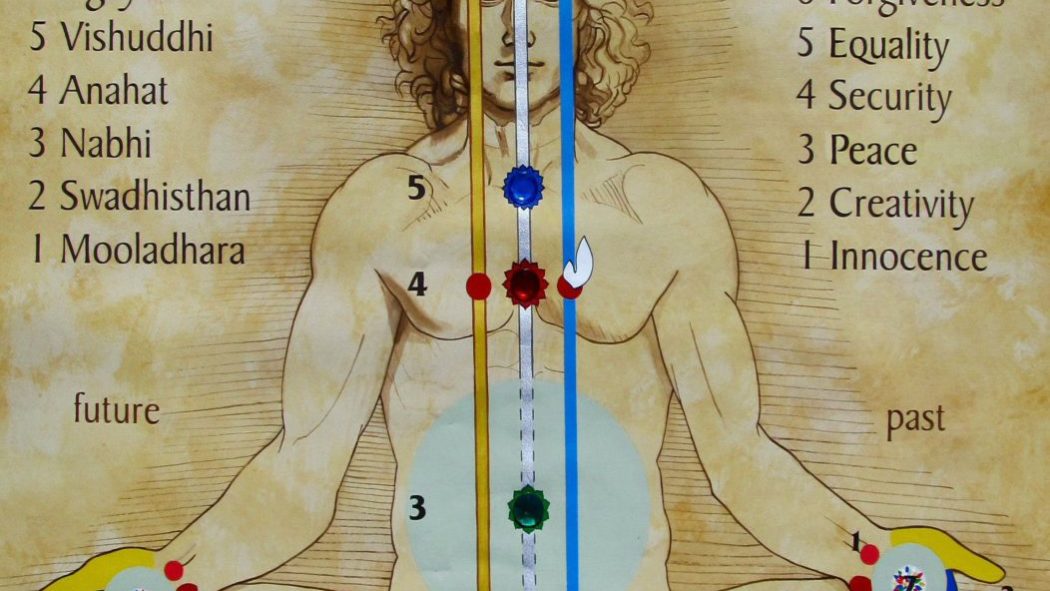 Sahaja Yoga Meditation releases an energy that gives us a good physical, mental and spiritual health, for this meditation has beneficial effects on the whole person.

Where does this energy come from? 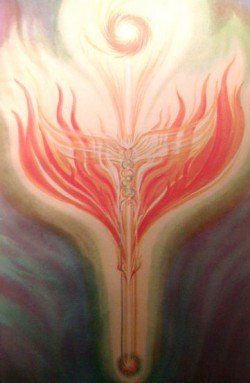 When the foetus is aged about 2 or 3 months in the womb, a column of rays emitted by the Divine Consciousness falls on the brain and as the shape of the human brain is like a prism, the rays are refracted in different channels which are the parasympathetic, sympathetic and central nervous systems.

The group of rays falling on the bones of fontanelle which is at the top of the head, pierces and passes directly into the medulla oblongata, and go down inside the spinal cord called the Sushumna Nadi, up to the triangular sacrum bone, at the end of the spinal cord, and settle down there. This energy remains into the sacrum and is called the “Kundalini”.

When the divine energy enters through the top of the head, the spark of the Spirit enters into the heart. In the embryo, the heart is located at the top the head. The core then moves down into the chest cavity, and then the Spirit lies there. It is only after Self-realization that the Spirit can once again be united with the Divine, resuming his seat at the fontanelle bone area in the brain.

How do we get separate from this energy?

Once the baby is born and the umbilical cord is broken, a hollow is created in the spinal cord. The connection is thus broken. Later, when the ego and the superego, which are the top ends of the sympathetic nervous system left and right, swell like balloons, they cover the brain, the bones of fontanelle becomes calcified and we are completely separated from the vital omnipresent Divine Force.

Realization can give us back this link with the Divine Force as it existed before we were born. Once again, we can feel this profound peace inside. Anyone who desires it can have it back as it is an innate and natural process within us.

Why do we get separated ?

As a foetus, we bath and swim in an unconscious stage. We are nourished by the Divine Energy as we are connected to it. But we cannot reflect God’s image are we are totally identified with it. By coming to life and developing our ego and super ego, we reach a point where we can balance these two expressions of the sympathetic nervous system and be ready to feel the parasympathetic nervous system. Then, we are ready to receive the awakening of this dormant energy, the Kundalini. This process took a long time in our evolution. Nowadays, we can get our brain enlightened and it can become the reflection of God Almighty, in a conscious way, with our all personality.

Here is a way to deepen this subject with the words of Shri Mataji :

For example, the left sympathetic nervous system is nourished by a subtle channel, called the Ida Nadi (Moon channel), and the right side, by a channel which is called Pingala Nadi (Sun Channel). This Ida Nadi gives the human being his emotional side. In one’s subconscious, the past is recorded beyond this Ida Channel. The Subconscious is the past, today’s past, then is the past of yesterday, the past of this life, past of the last lives and ultimately the past which was the one which came from all that was created since Creation took place, the collective subconscious. All these areas are placed vertically one after another and not horizontally. For our ascent one does not have to pass all these subconscious areas as said by many psychologists.

Wherever these loops meet, the energy centres thus formed are known as Chakras. These loops correspond to genes which are affected also by our day-to-day activity of left and right sympathetic nervous system.

The central one, which is the parasympathetic, is nourished by another channel, called the Sushumna Nadi (Channel of Ascent). Whatever we have achieved in our evolution is recorded and is established in this central nervous system….
There is one more residual energy which is coiled up and remains potential in the triangular bone’ called the sacrum. Residual energy means that it is the basic original energy which has not gone into division. When the Divine Energy fails on the brain of the fully developed foetus, then in the prism-like brain it fails into three categories. It happens due to refraction. The energy that fails on the sides of the brain cross over to form the sympathetic nervous system. But when the Divine energy fails on the summit of the brain which is like a prism, the original energy, without any refraction, passes through and coils down in the Sacrum bone as Kundalini. Perhaps the Greeks knew that it was a sacred bone, so they called it the ‘sacrum”. This original, complete energy is coiled into three and a half coils which is in a resting potential state. The subtle system we have within ourselves is built in.”

I am inspired
Go to Top
error: Content is protected !!