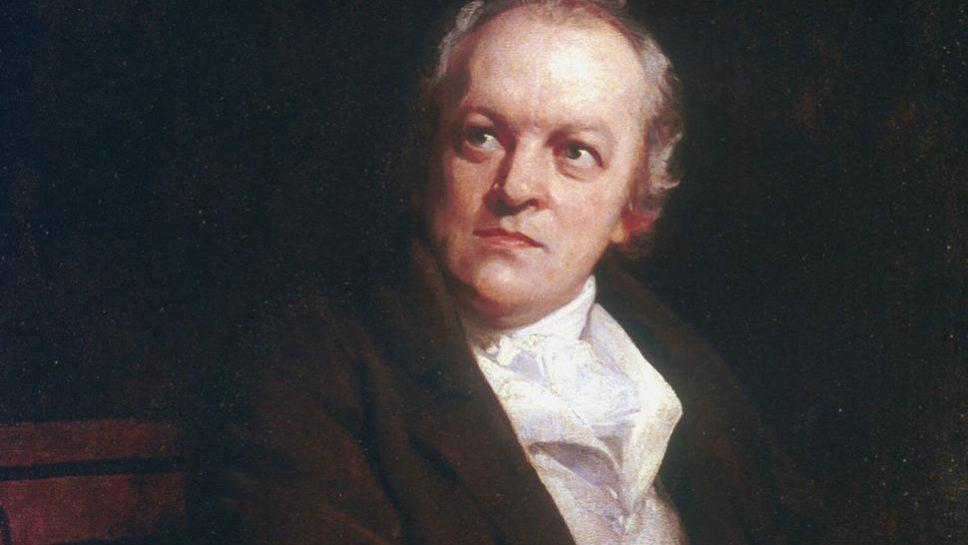 William Blake is born in London in the eighteenth century, when it was the beginning of an industrial and materialistic world. He fought against poverty and social injustices of the industrialized England. He has mastered the arts of drawing, painting, printmaking and poetry, to become a “revolutionary hero”. He always challenged the artistic youth of London to encourage them to confront the ideas of the past and the claims of the society. He wanted them to be faithful to their own imagination as he has already understood that science and progress would become a new religion without any compassion.

Blake rejects rationalism as he believes deeply that the confrontation with a materialistic world, where corruption and religious ritualism predominate on compassion, causes the death of our innocence. Wisdom cannot, according to him, be achieved without freedom and personal search for one’s own inner being, the Self. For this understanding, he is a real visionary.

Shri Mataji had a great respect for those men who wanted to awaken the conscience of their communities.

Those young people…wanted, all the time, some sort of a sensational game to play, to shock their minds, which are so full of conditionings and thoughts as if they were trying to escape from reality and wanted to enter into the illusion of an artificial life.  In a way, it is described that these are the worst times (Kali Yuga), when people are in this illusion and in confusion (Bhranti).  This illusion is very taxing and does not allow people to relax.  Thus, though the seeking of truth had definitely started and, despite all these superficial hurdles, Divinity should enter into all these countries in a very big way because they are all genuinely tortured and harassed people by themselves and they are not satisfied with their own circumstances and are trying to seek the betterment of their life.

These are the seekers all over the world.  What they are seeking is the peace of their own mind.  It is a good news for such people that a unique discovery has been found out by which one can achieve the peace within.  One has to go beyond the mind.

This was very old knowledge in the East, especially in India, and there were seers in the West who also knew about this knowledge by which one can achieve that state of Self-Realisation.  In England William Blake, Molière in France, De Maupassant in France, and many other poets like C.S. Lewis, and certain persons in America, have been endowed with this future vision of Divine life entering into human beings.

Art is a way to dive into the metaphysical world, and can be a way of salvation for modern men in this materialistic England. Blake, in his quest for wisdom, rejects scientific and artistic speculations, for the spirit of imagination is essential for him. For example, his “Isaac Newton 1795”, who personifies for him “the Reason”, shows how he dislikes the rational man. The rational man is tied to machines, tools and in that way, is not truly human. To Blake, Human Imagination is the supreme path to inner spirituality.

Spirituality was part of his life as all his work was based on the Bible, the foundation of his art. Many of his works relate to the Crucifixion and the Resurrection of Jesus Christ. The resurrection of Christ is a door to plunge in oneself. We now live special times were realization of our inner energy can lead us to real knowledge of ourselves. We can also give it to others. That is what Shri Mataji calls “knowing the truth”

Christ came on this earth to create a full awareness within us that we are the spirit.  So the accent of their preaching has been for the purpose they have come…. so you must understand that the truth when it comes to a person like that, not only that he knows, but he can make others also know, this is what William Blake has said: at this time men of God, that, you people, will become Prophets and will have powers to make others Prophets? So people sometimes say why didn’t happened earlier?  No, that was not the time, now the blossom time has come, so it is happening.

This is what one has to understand the complete comprehensive idea about the spiritual growth of human beings.

But spirituality does not mean that Blake valued the Church as an organisation. On the contrary, he was for the emancipation of the faith of the people, as the Catholic Church meant for him oppression and domination of the rationality against the spontaneity of the innocence. Jesus, for Blake, symbolises the natural relationship between divinity and humanity, and the unity between the body and the soul. There is no separation for him, human being is a beautiful creation that can fully become the reflection of God and that is why he is against orthodox Christianity. On this also he is a visionary as it is now the main idea of modern spirituality.

The ancient Poets animated all sensible objects with Gods or Geniuses, calling them by the names and adorning them with the properties of woods, rivers, mountains, lakes, cities, nations, and whatever their enlarged & numerous senses could perceive.

And particularly they studied the genius of each city & country, placing it under its mental deity.

Till a system was formed, which some took advantage of & enslaved the vulgar by attempting to realize or abstract the mental deities from their objects; thus began Priesthood.

Choosing forms of worship from poetic tales.
And a length they pronounced that the Gods had ordered such things.
Thus men forgot that All deities reside in the human breast.

In “The Marriage of Heaven and Hell”, plate 11, the third of Blake’s illuminated books.

Blake understood the concept of ‘sin’ as a way to control men’s desires and freedom. The moral code is not more a guide to protect oneself, but is imposed from the outside and is against the spirit of life. This is also a basement of his belief in social equality between men and women. Then no feeling are true, hypocrisy is the main rule as he wrote in this poetry:

The soul of sweet delight, can never be defiled.
When thou sees an Eagle, thou sees a portion of Genius, lift up thy head!
As the caterpillar chooses the fairest leaves to lay her eggs on, so the priest lays his curse on the fairest joys.
To create a little flower is the labour of ages.
Damn, braces: Bless relaxes.
The best wine is the oldest, the best water the newest.
Prayers plow not! Praises reap not!
Joys laugh not! Sorrows weep not!

In “The Marriage of Heaven and Hell”, plate 9.

To find back the way to inner moral, that lead us to realize the Spirit, we have to find back our real joy. Self Realization is the best way towards this union of our inner joy and our body. This is the true meaning of being a Christian in accordance with Blake’s own mythology that takes roots in universal symbols.  Here is what Shri Mataji says about it:

The people who talk of Baptism, like John the Baptist, he was really a realised soul and when he raised the Kundalini and put the water on the head, he really gave them realisation.  That is ‘baptism’.  Christian means a baptised person, but not any Dick, Tom and Harry can put his hand on your head and say you are realised.  On the contrary William Blake says, ‘the priest cursed on my head.’ .