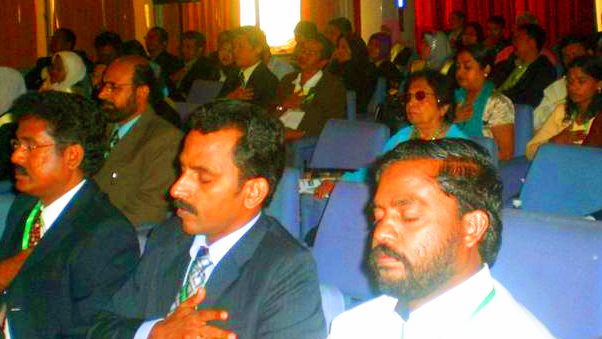 More than 700 delegates from over 100 countries attended this prestigious conference. All political systems and governments with the dawn of the new millennium have made a sincere commitment to make health care and health education available to all irrespective of ethnicity, religion and political color. Thus, the open International University of natural, traditional and complementary Medicines, has explored the importance of natural, traditional and complementary medicines for health-care (including evidence based healing methods, including spiritual healing.

With the dawn of the new Millennium, the human race has to make a commitment to make available health care and health education for all. Farsighted initiatives have enabled the field of medicine to embrace the concept of Holistic Medicine.

In his presentation the pioneering researches on Sahaja Yoga from Lady Hardinge Medical College, Delhi carried out under the guidance of Late Prof U. C Rai, along with some new researches carried out at the International Sahaja Yoga Research & Health Centre (Vashi Hospital), in last 5 years were presented to an audience of over 700 Doctors from around 100 countries.

This was followed by slides which briefly depicted Shri Mataji’s contribution to medical science and world peace, which has made her be regarded as possibly the most reputed spiritual scientist the world has ever seen in recent times.

After the presentation Prof Sandeep Rai with the permission of the Chair initiated for Self-realization programme, which of course was not scheduled on the agenda or attached to this Scientific Presentation. But it all happened as if with an inexplicable spontaneity as the Chairman readily agreed for the same as he granted Dr. Rai with a ‘go ahead’ signal. The entire milieu suddenly transformed so disciplined. Hundreds of Doctors in the audience received their Realization.

Next day a special workshop was conducted jointly by Dr. Sandeep Rai and Dr Madhur Rai, Chief Medical Officer & CEO at the International Sahaja Yoga Research & Health Centre, Navi Mumbai. In the beginning of the presentation, an introduction on Sahaja Yoga and its founder Shri Mataji Nirmala Devi was briefed by Prof Dr Sandeep Rai.

The extraordinary work and achievement done by Shri Mataji over the last 40 years towards the spiritual awakening of the entire humanity across the globe was highlighted. Slides depicting the significant global work of Shri Mataji and various academic honors conferred upon her by several world organizations, dignitaries including the Presidents, Prime Ministers and Governors from all across the globe, left the audience spell-bound and speechless.

It was followed by a talk by Dr. Madhur Rai on subtle system, Kundalini energy and various chakras and their qualities. Dr. Madhur Rai later initiated the Self-realization process to an interested international audience.

The Conference concluded with hosting of a banquet in honour of the delegates and visiting dignitaries in the conference. During the course of dinner the Secretary General and the Chairperson especially sought a meeting with Prof Dr Sandeep Rai. He was very impressed by the philosophy behind Sahaja Yoga. Subsequently, expressing his gratitude to him during the course of his discussion he offered Prof Rai a Honorary position of Professor, among other distinguished Professors at the prestigious Open International University for Complimentary Medicines, Colombo. Dr. Rai was especially invited to guide their students seeking PhD. Later he also offered research collaboration with the International Sahaja Yoga Research & Health Centre, Mumbai on Sahaja Yoga.