Rumi and the Sufis Poetry Event 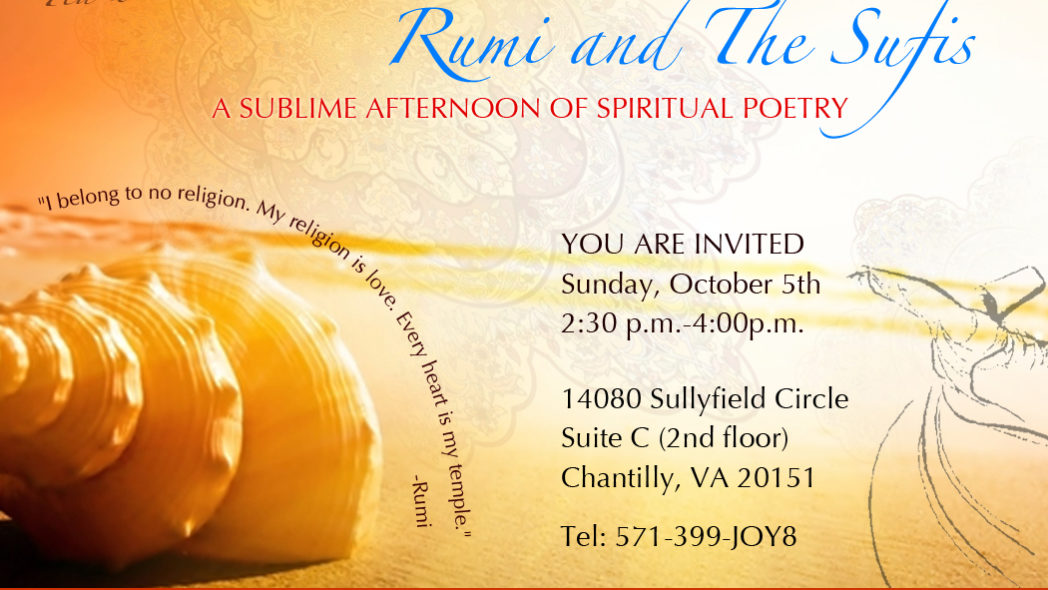 We have the pleasure to announce a Sufi poetry event in the Washington D.C. metro area that celebrates the spirituality expressed in the sayings of Sufis from Persia to India.

The event on Oct 5th at the Sahaja Yoga Meditation Center in Chantilly, Virginia, is dedicated to Shri Mataji Nirmala Devi, founder of Sahaja Yoga. Shri Mataji for many years encouraged Sufi musicians to further the message of love and unity through their kawali singing.

The poets being presented at the event are Sufis such as Rumi, Bulleh Shah, Amir Khusro, Kabir and more.

The Sufis were ordinary people to begin with. They were humble seekers who faced hardships and bore the brunt of mundane life. They weren’t particularly favored by fate: mostly unlettered, they were weavers, potters, peasants, merchants and butchers. But something innate, deeply seated within their being steered their course beyond their mundane existence into the immortal heights where angels dare.

And similarly, spiritual ascent isn’t a tale of material gain or conquests. Kings and valiant heroes have long faded into the pages of history, but Sufi saints, no matter of what remote past, are venerated to this day.

Their advent lends history its luster. Indeed, they are one of mankind’s most precious heritages. They are like stepping stones in our grand evolutionary process. The advent of great souls like the Sufis whether in the east or west, has always been crucial to overall human ascent.

And in Sahaja Yoga also we understand and celebrate their inner depth. The Sufis did not advocate rigid philosophies or doctrines, but based their principles on love.

As the Sufi poet, Bulleh Shah, says:
“You may break a mosque or a temple,
But do not break a heart filled with the love of God.”

“Rumi and The Sufis,” is an event that will capture the essence of love and lay out a feast for the soul. 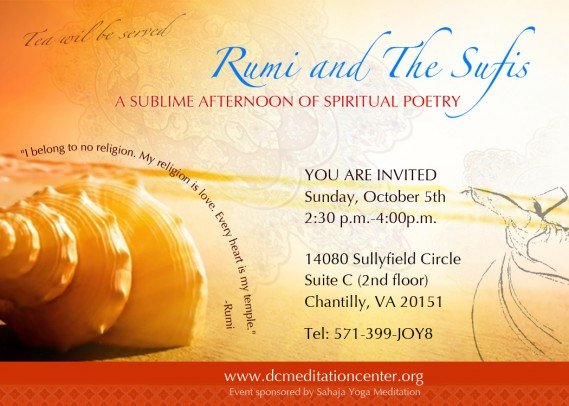 You need to find “yourself”
Go to Top
error: Content is protected !!